Stefi Alabastro giving the Opening Remarks during the KinaBOOKasan Launch 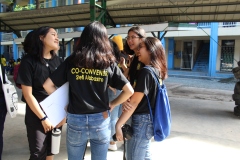 Preparing for the KinaBOOKasan Launch

Group Discussions on the Little Prince

The KinaBOOKasan Launch took place at the Concepcion Integrated School in Barangay Concepcion Uno, Marikina on October 20, 2018 from 10:00 am – 12:00 nn.

The program started with a prayer, followed by the national anthem led by the volunteers. The opening remarks introducing the program and its goals was given by Stefi Alabastro and was succeeded by numerous messages from government officials including Stella Quimbo, Commissioner of the Philippine Competition Commission and wife of Miro Quimbo, Marikina City’s 2nd Legislative District House Representative. Stella Quimbo gave an emotional and inspiring speech about the advocacy of KinaBOOKasan.

Such was an exciting and fulfilling experience as volunteers had the opportunity to talk and interact with the public school students through a series of interactive games and icebreakers.

Following these activities, the students were able to listen to and participate in an interactive reading of the first two chapters of the Little Prince by Antoine de Saint-Exupéry by two volunteers, Uni Roque and Carla Tanada-yam.

We would like to thank the volunteers and the participating students for a successful launch and we are looking forward to the next session.